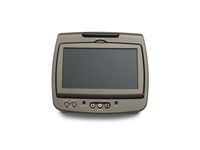 Genuine GM parts are backed by GM's factory warranty which are high-quality vehicle-specific with the right fit the first time.